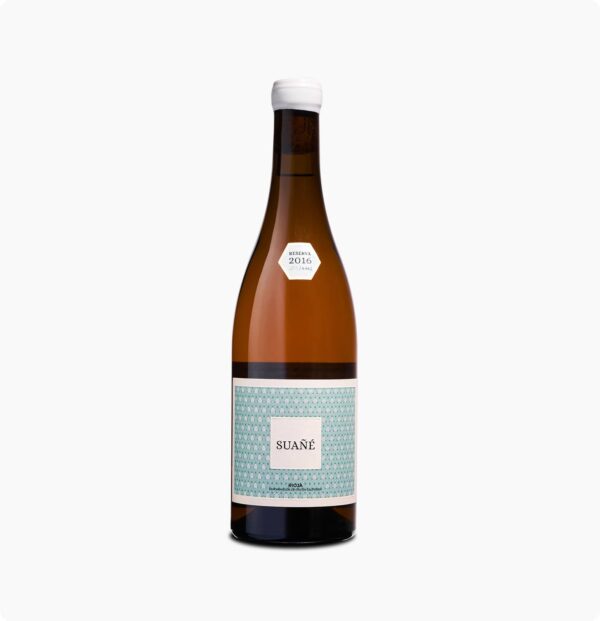 Suañé Blanco Reserva is a wine with D.O. Ca. Rioja from the Alonso & Pedrajo winery, characterised by its wines’ character and originality. The term Suañé comes from the phonetic transformation of the French word “soigne” which means refined, delicate, careful, cared for… characteristics the winery uses to define this wine.

The first floral notes are of ripe white fruit, apple and pear, with hints of citrus and grapefruit zest as well as herbal notes. On the palate it is very fresh and vibrant, with a good mid-palate. It is expressive, reproducing the sensations on the nose with notes of chamomile and lemon verbena. It is a structured, persistent, rounded wine, with an elegant, silky finish and a long, refreshing aftertaste.

The serving temperature is 10-12 ºC. The winery recommends opening it 30 minutes before serving. If decanted, it does not need to be oxygenated.

It pairs very well with rice dishes, spicy pasta dishes and smoked fish. It is undoubtedly an ideal wine to combine with all types of seafood, mussels, oysters, prawns, shrimps and prawns. Also with baked or grilled fish and seafood stews.

It is a blend of two plots from La Rioja. The Viura variety is more than 70 years old and comes from the Finca Valdinero, with clay-limestone soils at an altitude of 615 metres, in Villalba de Rioja. The Sauvignon Blanc variety comes from young vineyards at 580 metres above sea level. The grapes are harvested manually.

Regarding its elaboration, bunches are gently destemmed, macerated with their skins for 12 days until the spontaneous alcoholic fermentation is halfway through. Then, the grape juice from gently pressed skins is devatted in a vertical press and finishes fermenting in 228-litre French oak barrels.

After 12 months of ageing, the lees are stirred weekly until racking. Wine decants for 2 months in tanks with its own lees, to facilitate spontaneous clarification and light filtration prior to bottling.

It is a minimal intervention wine with a slight addition of sulphur dioxide at the aftertaste of fermentation and at bottling.

The Alonso & Pedrajo winery was born from a close and long friendship between two families who encouraged each other to start together the dream of making their own wine.

Theory was put into practice in 2011. They chose the land and, in October 2013, they started the first harvests.

They have not yet travelled very far, but it has been a very intense journey. They are characterised by respecting and minimal intervening cultivation and winemaking techniques, which allows them to make wines that seek to surprise with their character and originality, but without forgetting the origin of their grapes, the most western Rioja in the foothills of the Obarenes Mountains, in Villalba de Rioja.

Be the first to review “Suañé Reserva White wine”Cancel Reply