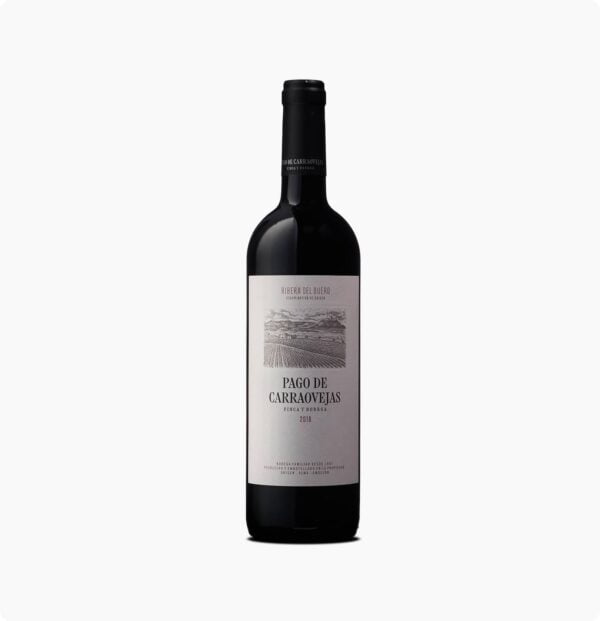 From Ribera del Duero comes this intense and structured red wine yet with the delicacy and affection characteristic of Pago de Carraovejas winery’s wines. A wine full of nuances where the identity of this territory can be perceived, albeit from a more balanced perspective.

A richly aromatic wine, where the floral nuances combine with the wild fruits and the noble subtleness of the oak. Complex on the palate, with a strong but balanced character and subtle tannins that lead to a broad, sweet aftertaste.

Vineyards planted between 1988 and 2011 are distributed from the middle zones to the moors at over 900 metres above sea level. They are located on harsh soils, where limestone marl outcrops with the addition of clays, sandstones and limestone gypsum.

During 2018, the balance that the vineyard needed was restored thanks to the heavy rainfall that took place during the winter and spring months and which was complemented with a hot summer resulting in an optimal end of cycle and consequently, a great vintage.

Grapes were handpicked and fermentation took place by plots in stainless steel tanks using their own yeasts.

The wine aged in French and American oak barrels for 12 months and before bottling it was clarified with natural egg whites in order to remove any impurities that might still be present in the wine and to soften the tannins.

José María Ruiz, a young Segovian full of interests and curiosity, started this project in the 1970s, linked to the Ruiz Aragoneses family.

The first harvest of Pago de Carraovejas was in 1992, which marked the beginning of successive extensions of vineyards and cellars, always guided by the principle of not losing one single bit of quality.

Nowadays they have 200 hectares of vineyards, in addition to 14,000 m2 of buildings where all their wines are produced.

Each and every process used to obtain the wine is meticulously controlled and taken care of, which guarantees a unique and exceptional result.

Be the first to review “Pago de Carraovejas”Cancel Reply