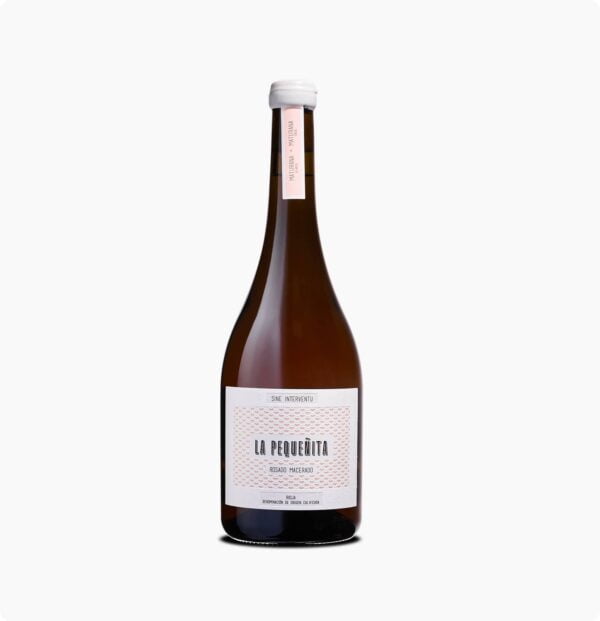 La Pequeñita Rosé, by the Alonso & Pedrajo winery, arises from the desire to highlight the value of small things. Whether they are small vineyards, scattered throughout the wine-growing territory of La Rioja, where grapes, due to their small number, are condemned to be mixed with others for their elaboration. Also small experimental elaborations that look for an alternative way to the most traditional elaborations. All this from the affection for small things, with minimal intervention in their production, looking for uniqueness and personality of what is born to be great.

In the ‘Minimum Intervention’ selection, the winery seeks the maximum grape expression through the least possible intervention, with the aim of preserving the fruit and the uniqueness of the different vineyards separately, and the character of each year, in order to offer the best of each one.

It has a pale pink colour. It is floral, with hints of violets, ripe white fruit and pastry notes. It is delicate, friendly, fresh, with a good fruity expression, with floral and citrus notes again.

We recommend opening it 30 minutes before drinking. If you prefer decanting, oxygenation is not necessary. Best served at a temperature of between 8 and 9 ºC.

It has young vineyards of Maturana blanca and Maturana tinta.

The viticulture is responsible and reasoned with minimal intervention, taking great care of the vineyard. No chemical fertilisers, herbicides or synthetic chemical products are used. The grapes are harvested manually.

The rosé comes from the co-fermentation of Maturana Blanca and Tinta. The vatting of the partially-crushed white grapes is introduced into the tank without any kind of adjustment. Spontaneous fermentation begins slowly and whole bunches of Maturana Tinta are added to the tank. The tank is partially drained halfway through fermentation in clay vats and the tank is refilled with grape juice until the fermentation is complete. Without pumping or stirring, it enables a slow carbonic maceration of red grapes for 3 weeks. The maceration is done with the skins for 78 days, followed by the pouring of the wine and the gentle pressing of skins in a vertical press. The lees are stirred weekly to induce natural decanting. There is a light filtration prior to bottling. It is a minimal intervention wine, without any kind of additives.

The Alonso & Pedrajo winery was born from a close and long-standing friendship between two families who encouraged each other to start their dream of making their own wine.

They put theory into practice in 2011. They chose the land and, in October 2013, they started the first harvests.

They have not yet travelled very far, but it has been a very intense journey. They are characterised by respect and minimal intervention in cultivation and winemaking techniques, which allows them to make wines that seek to surprise with their character and originality, but without forgetting the origin of their grapes, the westernmost Rioja in the foothills of the Obarenes Mountains, in Villalba de Rioja.

Be the first to review “La Pequeñita”Cancel Reply