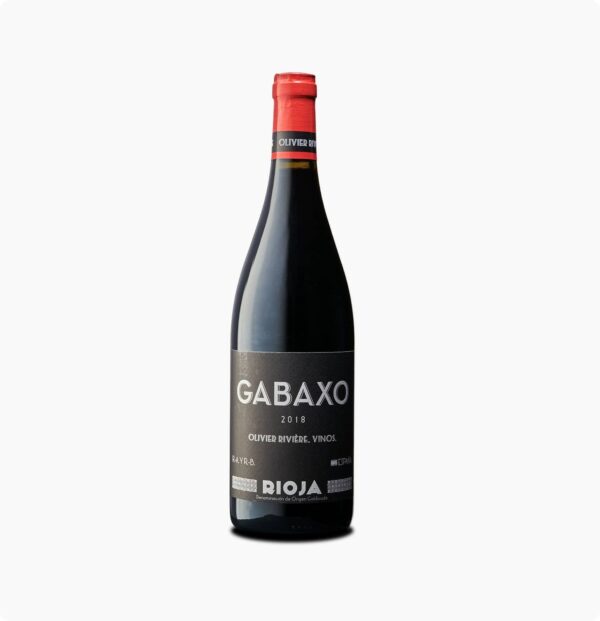 It is a red wine by Olivier Rivière, a french man settled in la Rioja who has elaborated this wine through a coupage of Tempranillo and Garnacha varieties. This wine has been named after Rivière’s nickname ‘gabatxo’.

It has ripe red fruits and violet aroma with spicy hints. It is intense cherry red of colour.

Recommended serving temeperature is between 12º and 14ºC.

Grapes are from Tempranillo and Garnacha varieties and come from 3 sub-areas of the region: Rioja Alavesa, Rioja Alta and Rioja Oriental.

Wine has not been clarified nor poured before bottling.

Olivier Rivière is a French oenologist that studied in Bordeaux and has been living in La Rioja for some years now. He worked for 2 years with Telmo Rodríguez, one of the most internationally renown Spanish oenologists, with whom Rivière discovered La Rioja land and wines. Soon he saw that there were vast lands, vines and areas of La Rioja and Navarra yet to be discovered, and started his own wine-making project.

He does not have neither his own winery nor his own vineyars, which is usual in France but not in La Rioja, and bought his grapes in La Rioja Alavesa and Baja. Nowadays Oliviere Rivière is one of the leading wine producers of La Rioja.

Since 2015 he has been part of Rioja ‘n’ Roll, a  alternative movement fromed by a group of independent young producers that unite to advocate for the wine heritage of La Rioja through town wines, applying their own criteria.

Be the first to review “Gabaxo”Cancel Reply