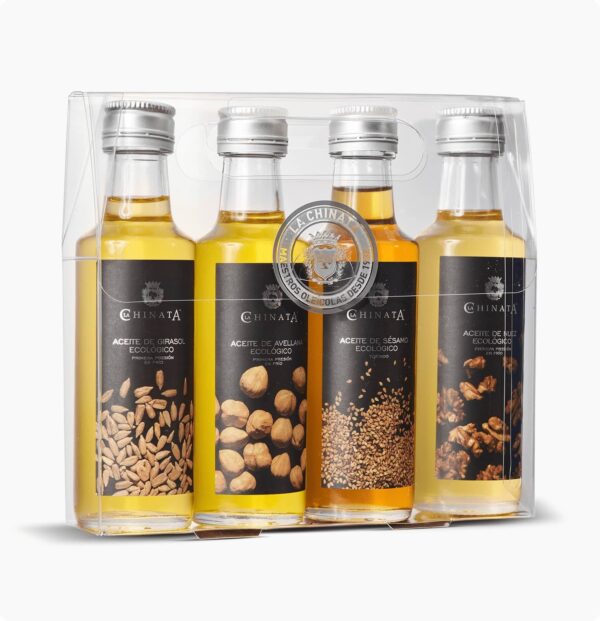 It is no coincidence that organic seed oils are becoming increasingly popular, which is why we have added a selection of these so that they are never missing in our pantry. A variety of excellent quality, rich in fatty acids and with a multitude of properties for the organism. We could not overlook them. That’s why we have made a case with four 100-ml bottles to always have on hand and add a different touch of flavour, texture and smell to our dishes.

This is an organic oil from first cold pressing. Its flavour reminds of nuts and its aroma is sweet. It has many health benefits as it is rich in vitamin E, manganese and copper, but also omega-6 and omega-9 fatty acids, as well as being a great source of antioxidants.
It is recommended to enhance the flavour of salads and fish, as well as for baking.

It is first cold pressed, so it preserves all its nutritional and organoleptic qualities (smell, taste, touch…). Its flavour reminds of sunflower seeds and it is especially recommended for sauces and confectionery, among others.

This oil is made from toasted sesame and is very popular in Asian and Middle Eastern cuisine. It is made, unlike the rest, from toasted sesame, which gives it its dark colour. It is very tasty, so it is recommended to use in small quantities. This oil provides an intense sesame aroma and gives a very special touch to our dishes. It is ideal for dressing salads, stews and noodles.

It is first cold pressed, light in colour and has a mild flavour and smell. It is recommended to use raw to preserve its properties and flavour and it is rich in Omegas 3, 6 and 9. It is perfect for salads and vinaigrettes, as well as for baking recipes such as cakes, biscuits or brownies.

Be the first to review “4 Seeds Oils Case”Cancel Reply

Store in a dry and cool place. Keep away from direct light.